DREAMS HAVE A LANGUAGE

The Dreams Have a Language exhibition and installation in Mudam (Luxembourg) is the starting point for a film, created in collaboration with Luxembourgish director Donato Rotunno and French artist Sylvie Blocher. Some meetings, some conversations, some of the stories recounted, some particularly meaningful moments of flight, whether beautiful, intense or fragile, that occurred during the project are being used as raw materials for a joint work of film writing that will result in the shooting of several sequences played by actors. Combining a documentary and fictional writing approach, the film offers « an assemblage of words, gestures, moments that open up imagination, expectation and suspense ».

The project Dreams Have a Language is a collaboration between Mudam and Tarantula Luxembourg and is produced with the support of Film Fund Luxembourg. 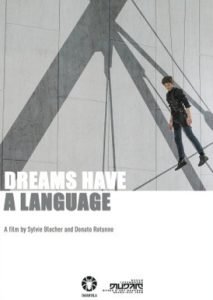