Meet Dickie, the ultimate looser in this animated non dialogue comic series, featuring sarcastic, cynical and appealing humour suitable for young adults.
In his original form, Dickie was a farmer and the stories took place in and around the farm. But Dickie has evolved to become a universal character, who can be transported to any time or place. The only thing that stays the same is his round head, characteristic moustache and the fact that things always end up going wrong for him.
A must for Dickie book fans ! 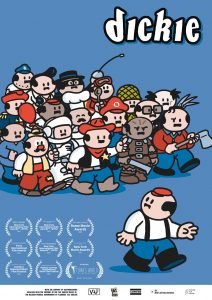